Cyberattacks, disinformation, the IT Army.

The world’s first cyberwar is happening right now. The war in Ukraine is savage, like all other wars, but it is also the first cyberwar in history. Read on to find out what that means.

The war in Ukraine is savage, like all other wars, but it is also the most cyberwar in history. It has its own active digital front that the whole world can also follow on mobile phones 24/7. The first truly hybrid war is happening now right in front of our eyes.

No one thought that a large scale armed conflict in Europe could ever happen again. Nobody expected bombs falling on homes and hospitals. What we have seen recently on our TVs and smartphones is no different than other wars all around the world, but with one exception: we are constantly bombarded with images from the front, 24 hours a day on every possible channel, on our streams, feeds and walls.

We have also witnessed a spate of hacker attacks, cybercrime, fake news, and generally strong response from BigTech companies like Meta, Netflix and Spotify, as well as some cryptocurrencies and NFTs. With the outbreak of war in Ukraine, for the first time ever, we can follow a completely new theatre of war in cyberspace. Every day we hear reports of new cyberattacks on political and military institutions, private companies and even state media. Ukraine is supported in this war by the famous Anonymous collective and Russia by their so-called hacker patriots. Ukraine even has its own digital army, that quickly garnered over 300,000 volunteers after an appeal to IT experts went global.

Most sources state that the war in Ukraine started on the 24th of February 2022, the day when the first Russian tanks rolled into Ukraine. This war, however, actually started well before the ground operations with a cyberattack on key Ukrainian institutions.

This same strategy was used by Putin in 2014 during the annexation of Crimea, when Putin's cyber corps managed to paralyse not just Ukrainian telecommunications networks, but also control of the state's defence systems.

Interestingly, the first battle of this war did not take place in Ukraine, but in two quite disparate locations, Microsoft headquarters in Seattle and at Slovak anti-malware company ESET in Bratislava. It was there that, almost at the same time, experts discovered wiper malware targeting Ukrainian ministries and financial institutions. Wiper malware, as the name implies, is a type of malware designed to destroy entire servers and wipe their data.

Experts at Microsoft not only identified and blocked the threat, but also immediately notified American authorities. They, in turn, alerted Ukraine, as well as their allies in Poland and the Baltic States.

The attack on Ukraine was supposed to effectively paralyse the country's communications and financial institutions, sewing chaos before the land invasion. This Russian ruse was, yet again, intended to be quick and decisive! None of these Russian tactics were successful and consequently we are now witnessing a continuing conflict on land, in the skies and in cyberspace.

War in the fifth domain

Since 2016, cyberspace has been officially recognised by NATO as the fifth domain of war after land, sea, air, and space.

For years experts have debated as to whether the term cyberwarfare is accurate. Until now, the term cyberterrorism has been used. As the rules of the internet are not clear and open, no one can ever know for certain who made an attack and what was the specific purpose. Even with the war in Ukraine, experts claim that identifying specific human victims of cyber activities is difficult, however the scale of hybrid methods being used is so great that it can de facto be considered the world's first cyberwar.

In reality, cyberwarfare mechanisms are currently in use by all major countries in the international arena. Their goals may differ, spying, sabotage, propaganda, disinformation and even interference with other country's economic processes. This latter is a particularly delicate issue, since the world's economy is a lattice of connected systems any such interference may also have a negative impact on the country undertaking such an operation, which is why the EU needed to deliberate before removing Russia from the SWIFT system.

The legendary group of hacker activists officially declared "war" on Putin the day after Russia invaded Ukraine. Since their announcement on Twitter, they have been very successful in making life difficult for Mr. Putin.

Anonymous' support for Ukraine was obvious. This decentralised group of tens, if not hundreds of thousands of specialists, is a strong weapon for any side in combat. Their policy is always to stand for the weaker side, fighting against both political and financial dictatorships. In 2009, they helped Iranians protesting against election fraud, a year later they supported Julian Assange and WikiLeaks. They were also the digital arm of the Arab Spring and were heavily involved in the fight against ACTA (Anti-Counterfeiting Trade Agreement).

Only a week into the war, they already had several spectacular coups under their belt. They published a database of employees from the Russian Ministry of Defence, took down the websites of most Russian ministries, offices and state institutions, blocked banks and temporarily prevented the supply of natural gas in Russia. Most spectacularly, they took control of Russian propaganda TV channels spotlighting Putin’s "special military operation in Ukraine", broadcasting instead actual images from the invasion. Every day they continue to work in the shadows, announcing their successes as they happen, but due to its nature, much of what they do remains secret.

Initially, at the start of the invasion, Ukraine did not intend to create a cyber army, when the Minister for Digital Transformation Mykhail Fedorov officially appealed to experts around the world to join the IT Army, the reaction from technology companies and cyber specialists was overwhelming. The appeal and its response were unprecedented with over 300,000 volunteers enlisting.

Of course, Ukraine is not defenceless. It has learned from 2014 and subsequent Russian attacks on its energy infrastructure, investing heavily in digital defence, not only for state controlled sectors, but for non-governmental domains as well. In addition, countries on NATO's eastern flank, Croatia, Estonia, Lithuania, the Netherlands, Poland and Romania joined the appeal and activated rapid reaction cyber forces to help Ukrainian authorities respond to cybersecurity attacks.

This war is also unprecedented, in that we (as a society) are constantly subjected to the pressures of disinformation. Our streams, feeds and walls have become arenas of conflict, acrimonious and vitriolic.

Russia has much experience in sowing disinformation, having used digital sabotage for many years to influence public opinion in Europe, the USA and beyond, sowing hatred, creating divisions, and unbalancing societies. It is a tried and tested narrative that feeds and preys on deep-seated fears.

In this first hybrid war, all of this is happening on a huge scale, but Ukraine and their charismatic leader Volodymyr Zelensky seem to be winning this war. Pictures of Ukrainian tractors dragging away Russian tanks will forever pass into the iconic images of this war. The Ukrainian president's acting background is not without significance, as he navigates public relations like a seasoned diplomat. This Marvelesque superhero and the importance of he and his family remaining at the front, not abandoning his country or people, cannot be underestimated. His words have already become famous, like his quip at America's offer of evacuation,

"I need ammunition, not a ride."

The war in Ukraine is the first hybrid war in history where cyberattacks are on a par with the attacks on the ground. It is also the first where there is no guarantee that digital activities will end when conventional warfare ends, regardless of the final outcome. 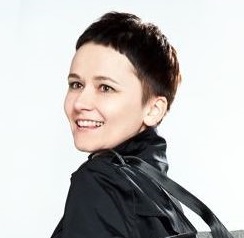 Ela joined the Cocomore team in January 2021.She loves catchy phrases, but equally adores beautiful images and has a passion for combining text and image to create powerful messages.

Never bored, she has an "octopus" personality with endless curiosity, having worked as a marketing communications expert, linguist, editor, designer, photographer, and art teacher. She has won various awards including for visual poetry, product design, CSR campaigns and was very proud to have her drawings exhibited recently. At Cocomore she likes to use her combined experience from all these fields to help create enduring, impactful messages.