Ela started as a working student at Cocomore in 2003. Imagine the amount of tech changes she has seen during her career and the growth she managed inside the IT department! 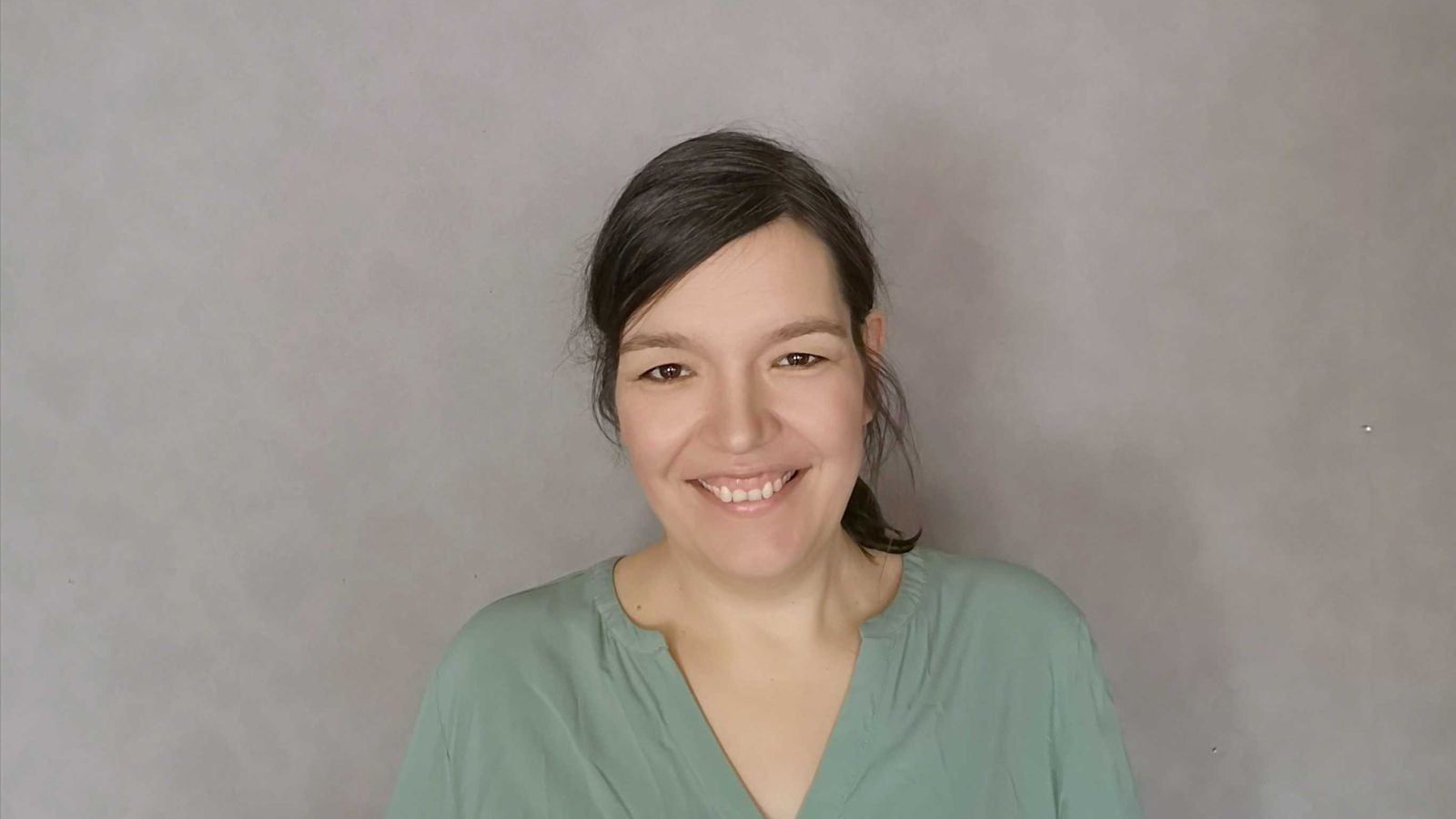 If you asked someone at Cocomore about Manuela, there is a high chance many wouldn't know whom you mean. For good reason, because come October, she will have been plotting for 17 years to make sure that everyone calls her Ela.

Let that sink in: If someone was to join Cocomore right out of college today, that person would have started school later than Ela joined Cocomore. And the craziest thing about it is not the fact that Cocomore was around back then, it is that you would spend one hour with Ela today and afterwards could not imagine this comparison to be true because after all these years, she is still such an open-minded character.

Back in the days

Ela started as a working student at Cocomore in 2003. Imagine the amount of tech changes she has seen during her career and the growth she managed inside the IT department! Back then, we were just a handful of people, with one of the greatest IT gender quotas you could imagine.

One of Ela’s favorite stories depicts these beginnings perfectly. There was a Christmas party at Cocomore, with Ela the intern and other eight persons in our CEO’s living room. His well-mannered children were serving sweets. This Christmas party is still being talked about today and hard to imagine with our current size, were Cocomoris from many cities in Spain and Germany join to celebrate Christmas. 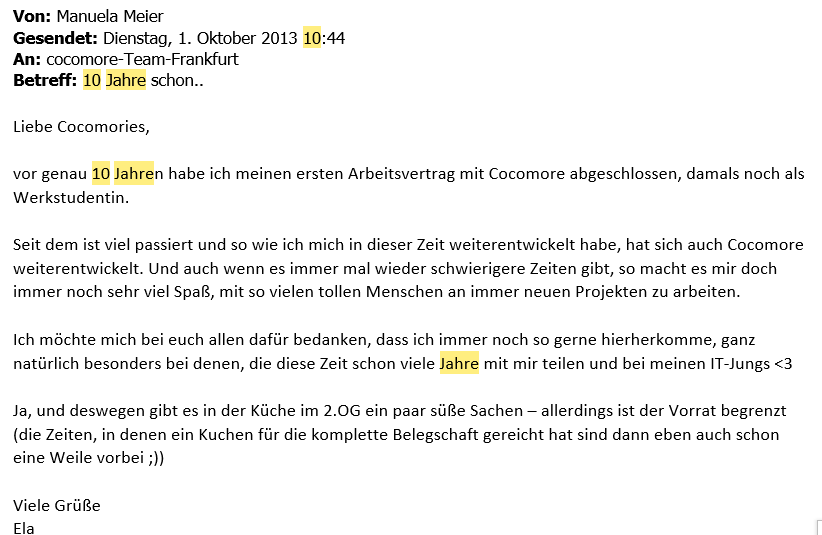 Before Seville was a thing, Ela was already ten years with us. And even today this evidence is two words away in her mail client

It takes a lot of heart to build up durable structures

When you talk about the IT department at Cocomore, you will have to talk about the Seville office that was in great part cared for by Ela over the years. Seven years ago, Cocomore Seville consisted of just two Spanish guys. They had spent a couple of months in Frankfurt, to get to know the company and to be integrated into our company culture. The team was so small that we shared office with our partner Atlantic in the outskirts of Seville. Other two guys joined shortly after. Out of those four that started, one is now leading the PHP developer team and the other our Drupal developer team. Since then we grew a lot in Spain, and many other professions joined our devs there.

In the meanwhile, Ela kept travelling from and to Seville to keep the communication flowing and the team happy. This does not only apply to the working environment, as she has been spending a lot of private time with the team whenever she was there. She knows everybody’s favorite food places, has seen their favorite soccer teams play, knows their families and some of their friends. At some point she even started spending many vacations with her husband there. Every time they fly over, at least two or three ex-Cocomoris spontaneously make time to meet them. And the other way around, almost every Spanish colleague that has been visiting our Frankfurt office in Germany also got to spend memorable times in Ela’s city of residence.

You could argue that a company like Cocomore has to be very careful about starting an expansion experiment in another country. Or you could be proud, as a Cocomori, that it is a matter of people for us. This experiment succeeded naturally because of great folk like our Spanish colleagues and our CTO. 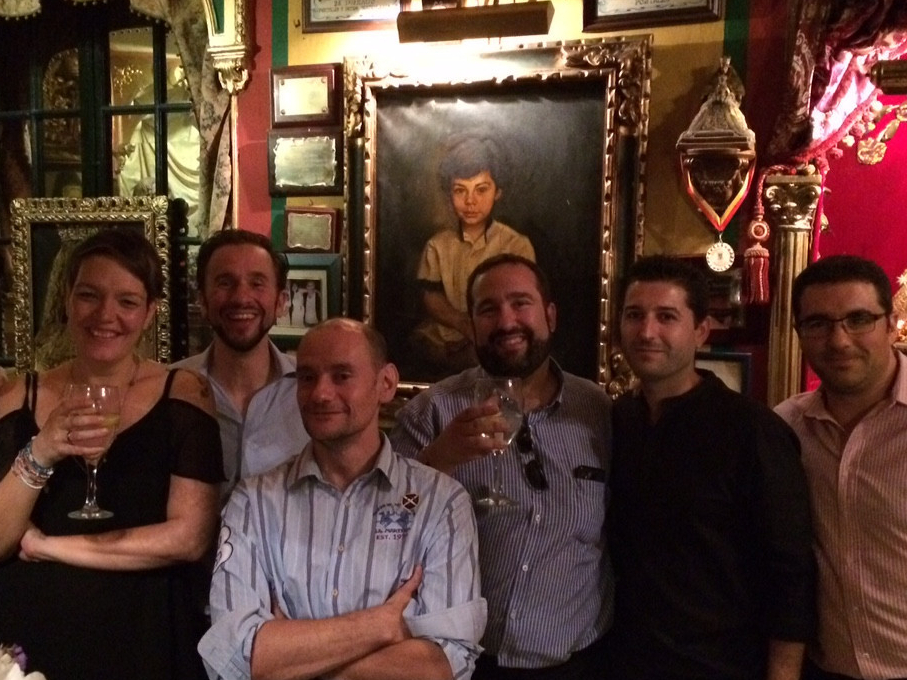 17 years is plenty of time to see companies pivot in all kinds of directions, depending on what's buzzing loudest. Not so at Cocomore, where Ela was a rock in the sea over the years, making sure long-term decisions were made that would benefit the team and the company, carefully waging between the interests of our core areas: IT, Marketing and Experience Design, and always with a heart for our fellow developers’ needs.

And there is beauty in walking all this journey in one company: Progressively taking on more responsibility and growing personally and professionally allowed Ela to be able to represent the interest of more and more groups of colleagues. And we all know that caring for developers of different kinds, QA engineers, project managers, dev-ops, and solution architects can become quite a challenging balance act.

Additionally, spending 17 years in a 20-year-old company means that Ela has matured professionally just about the same way that the company itself has matured as a system. If someone stays as open-minded as Ela throughout this journey, it’s hard to find a better match.

And maybe also Cocomore has matured at the same time. Given the overwhelming male majority in tech professions it probably takes some organizational maturity to recognize that it’s actually a woman who is best-suited to do the CTO job. We consider ourselves lucky to understand both rationally and emotionally what a great door we just opened by having Ela represent us-Cocomore as a CTO.

We wish you all the best and are proud to work at your side, Ela! 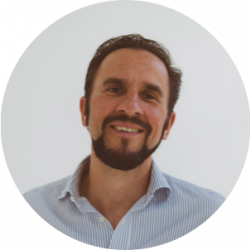 Marc Kutschera has been working for Cocomore since 2000. Prior he worked as a management consultant and independent contractor. At Cocomore he is Chairman of IT and account management. Working at the interface between technology and communication is exactly which inspires him most about his work. Thereby he trusts in the motto of the scouts: be prepared! 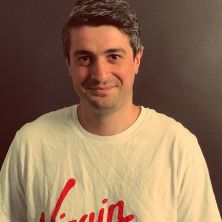 He makes sure that we follow the same vision and processes, that we have a good sense of ownership and  that we express our proactivity when working in projects.

His passions lie with people and the dynamics of many departments working together.