In the entertainment industry, virtual reality (VR) already belongs to daily business. But for which other branches might this technology investment pay off?

By launching the PlayStation VR last October, the Japanese electronics group Sony has presented a promising technology to the public for the reasonable price of 399 euros*. Let’s compare: Those who want to dive into virtual reality with Facebook’s competing product OCULUS Rift have to pay 599 euros*. The HTC Vive even comes to 899 euros*. For the Sony 3D game experience, the PlayStation 4 with headset and corresponding tracking camera is needed – which already exists in millions of households worldwide. So, it’s not surprising that within a short time, the sales figures have exceeded all expectations.

In the entertainment industry, virtual reality (VR) already belongs to daily business. But for which other branches might this technology investment pay off? How far is the stage of production for relevant video content in health care companies or the automotive industry? Furthermore, how does VR work exactly? When visiting the metricminds production studios in Frankfurt a few days ago, we could see for ourselves: at an exclusive workshop our staff members could take a look over the game developers shoulders for one day. And they were able to test the PlayStation VR as well as HTC Vive and OCULU Rift for all it’s worth. The guys from metricminds answered all kinds of questions – including founder and Managing Director Philip Weiss as well as Director Cutscene & Technical Artist Christoph Schulte.
*Source are online shops of established electronics companies, information without guarantee as of 01.02.2017 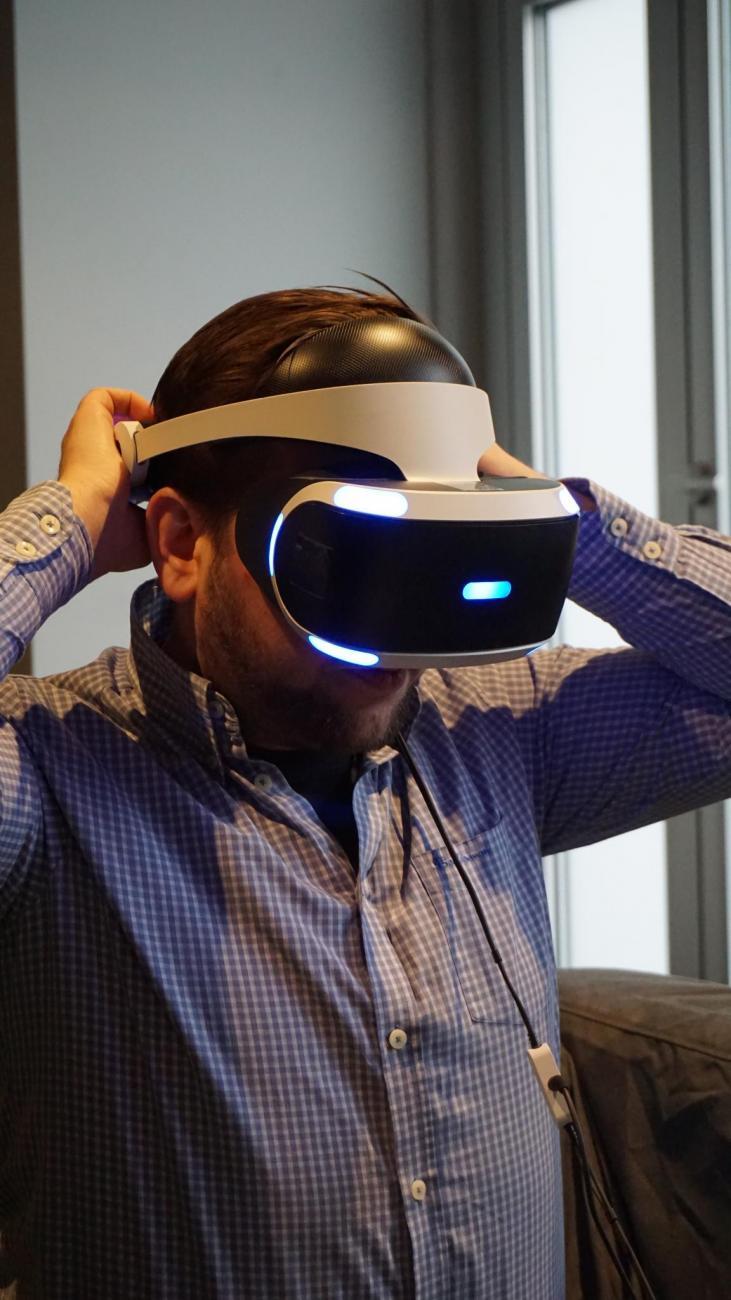 Christoph, in short: Who is behind metricminds?

Christoph: We are experts for animation and have already filmed countless real time videos for international game manufacturers such as Warner Bros., Games Montreal or Splash Damage. The core of our 500 square meters production hall in Frankfurt/Main is the Motion Capture System with all in all 68 cameras. They allow us to capture the motions of up to twelve actors in tracking suits. Ideal conditions for shooting high-end animation movies in 3D for video games or the advertising industry.

What is VR and how does it work?

Christoph: Virtual Reality is a setting which was created through computer animation and where we can move in real time. VR actually deals with what we see and how we perceive these virtual stimulations. The immersion, the plunge into a scene with all its details, plays a great role here. The greater the degree of immersion, the more authentic seems what happens for us. The transferring medium is the so-called Head-Mounted-Displays (HMD). As soon as we put on a headset such as the PlayStation VR, we enter another world. The surrounding and all its objects we notice are generated by the computer.

How does a VR computer game run?

Christoph: Speaking of the PlayStation, its tracking camera recognizes the moves of the VR glasses and delivers the corresponding pictures. If the head moves to the left, the picture turns that way as well, if you look up, you’ll see the sky and so on. So, by using the corresponding control devices, for example in an imaginary planet the gamer can walk through the jungle and observe a Tyrannosaurs Rex within 360-degree view while sitting on the sofa. What’s striking here is the frequently occurring “motion sickness” in VR games. The contradiction between what the eyes see in the virtual world and what our body actually experiences, might upset the stomach. That could happen mainly when moving in the virtual world while sitting on the couch in real world. And the picture’s repetition rate (fps) has a great impact on the motion sickness: the higher the refresh rate, the less chance of sickness can be noticed. The sensible reaction to the outstanding sensory perception differs from person to person.

What alternatives to PlayStation system are on the market right now?

Christoph: Glasses like the Google Daydream or Samsung Gear VR are operated via smartphone. Therefore, only the requested animation has to be started and the device has to be placed into the VR glasses. The best picture quality, however, are reached when a HMD, for instance the HTC Vive or OCULUS Rift, is connected to a high-performance computer.

Philip, how does a typical customer request look like for you?

Philip: The animation of computer games is our special field. The main part of our customers make up game manufacturers, mainly from abroad (England, USA, etc.). At the beginning, we receive a script where all the different characters are described. Our job starts with creating a visual story around it. But we deal not only with gaming and get offers from all different kind of companies. We enjoy the variety.

Philip: In the gaming community, VR is commonly widespread, but the technology itself is still pretty new, which predicts us to forecast a great growth of the market in the upcoming years. Basically, VR can be useful for all kinds of companies: Be it a 360-degree presentation for an architecture office up to an ultrasound video in 3D for the gynecologist or the VR marketing video for a sporting equipment manufacturer – there are many opportunities. At the same time, the use of modern technology pimps up the public image.

Christoph: The automotive industry likely offers one of the biggest markets. For a car manufacturer, we already developed a normal app by which the sales team should get trained for sales talks. This kind of training could also be possible with VR. By simulating the dialogue, the staff can practice with a virtual customer on the iPad. The production of gamification apps shows a great potential and is very interesting for us as we can benefit from our animation experience.

Is VR going to make a better future?

Christoph: Well, VR can do much good things at least. Let’s take Medicine for example. There are so many possible fields of application as it offers doctors better diagnostic analysis and hence a faster start of the appropriate treatment. After an amputation for example, VR simulations could be used according to the mirror therapy in order to fight phantom pains. Or they could help paralyzed persons during the physiotherapy to train themselves back into motion. Professional staff could get skilled via VR in different medical areas.

Where exactly would you draw the line between Virtual and Augmented Reality (AR)?

Christoph: Speaking of Augmented Reality, we understand animated things which are inserted over real objects in our surrounding – it is also known as Mixed Reality. A great success and best practice example for Augmented Reality was the app ”Pokémon Go“ last year. The level of immersion is in comparison to VR not as high as the picture quality does not fit to out reality and it’s obvious that we are in two different worlds. Currently, Microsoft is working with its “HoloLens“ on the right hardware for the everyday life with AR.

AR or VR – which system will succeed in the end? What do you think?

Philip: Even though AR is more difficult to produce it shows a higher potential for integrating it into people’s everyday life, because there are wide fields of application and it could provide better benefits. Whereas VR helps you to escape the real world for a while by entering a whole new world – for the future development everything is possible. It might be possible to really step into online shop virtually in the future in order to look at the items before purchase in a 360-degree view.

Christoph: Basically, there are so many challenges developers have to cope with on both methods before VR and AR will become normal.

Thank you both for the interview! 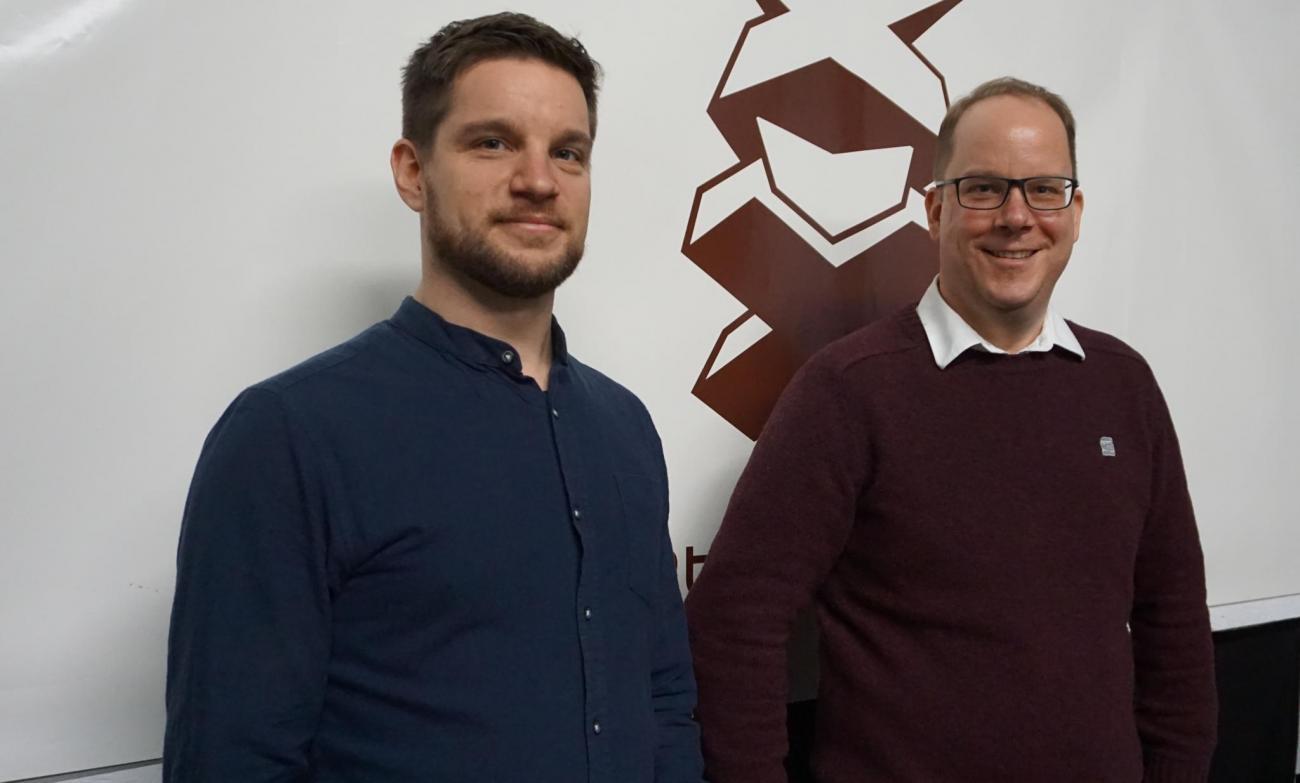 About Philip Weiss and Christoph Schulte
Philip Weiss, founder and managing director of metricminds, is a professional filmmaker and studied Broadcasting and Film at Emerson College in Boston in the late 90s. He discovered early his passion for animated films. At that time, the technology was set at an initial stage. Back in Germany, Philip decided to establish a service company for animation in Frankfurt in 2001.

Christoph Schulte studied Media Informatics at the University of Applied Sciences Gießen-Friedberg and has joined the team as director Cutscene/Technical Art since 2009. Already in 2006, the graduated engineer wrote his thesis about „Facial Capture“ at metricminds.

Student Gertrud Tscherkaschin is currently doing her Bachelor degree in Online Communications at the Darmstadt University of Applied Sciences. At Cocomore she is taking care of the Social Media presence of the agency and organizes new content for the corporate blog in cooperation with the different departments. After her practical semester at the Corporate Communications department of the agency she is going back to University where the next projects are waiting for her.